Posted by smART bookx Stationery on Thursday, April 9, 2015 Under: Fine Art and Floral
Our Klimt stationery is one of the most popular Fine Art ranges we publish: 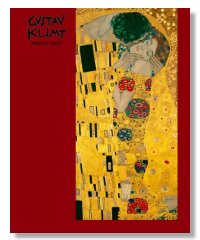 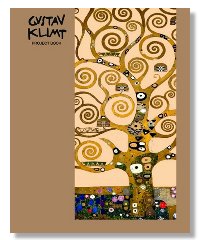 Coming in April 2015 is the Blank Sheet Music Manuscript book below ... 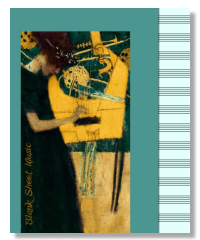 Gustav Klimt ( 1862 – 1918 ) was an Austrian Modernist and Symbolist painter and a founder member of the Vienna Secession group of artists. Symbolism is a very disparate artistic movement, a philosophy rather than a specific artistic style, in which the artist employs emblems to convey meaning. Although it is true that these emblems are frequently fantasy images they are usually intensely personal which often makes the resulting works difficult to interpret. In the case of Gustav Klimt this difficulty is compounded by the fact that he was a private man who spoke very little publically about the motives behind his art, preferring instead to direct inquirers to the work itself.
Klimt took the established academic route to artistic success. His art had such a heavy focus on the female form it is not surprising that, at times, he pushed the boundaries of public opinion, often being labelled as pornographic. However, generally speaking he received much critical acclaim and consequently financial success particularly at the pinnacle of his career—his Golden Phase— during which he created the two paintings on our The Kiss Notebook:  The Kiss ( 1908 – 09 ) and Portrait of Adele Bloch-Bauer I ( 1907 ).

Portrait of Adele Bloch-Bauer I (Notebook back cover)

During Klimt’s Golden Phase he would combine oil paint with layer upon layer of gold leaf (his father was a gold engraver) intentionally leaving the surface flat (i.e. there is little or no depth perspective) in order to concentrate the viewer’s eye fully on the luster of the gold. The result is an effect reminiscent of Byzantine art or a medieval manuscript.  It exudes opulence and is consequently as popular today as ever. (Portrait of Adele Bloch-Bauer I sold for $135 million in 2006, making it the fifth highest on Wikipedia’s adjusted list of the world’s most expensive paintings sold since 1987, ahead of both van Gogh’s Sunflowers and his Irises.)

In : Fine Art and Floral

Tags: "klimt tree of life" "klimt the kiss" "klimt paintings"
« Back to posts