Posted by smART bookx Stationery on Wednesday, April 8, 2015 Under: Travel and World Cultures 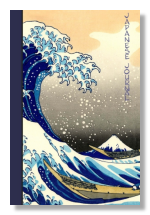 Journal (left), Notebook (center) and Pocketbook / Small Notebook (right)
with The Great Wave off Kanagawa by Hokusai wrapped around the front and back covers.

Hokusai was a Japanese print-maker who lived at the beginning of the 19th Century and had no less than thirty different names over the course of his lifetime. The famous Great Wave off Kanagawa is the first print from a series of thirty six which he created under the name Katsushika Hokusai during his sixties, when widely regarded to be producing his best work (so it’s never too late!). The central theme of the prints is Mount Fuji which can be seen in the background. As a Japanese Buddhist, the mountain represented the gifts of life and immortality, and Hokusai had something of a lifelong obsession with it, returning to it again and again in further print series.
This Japanese stationery series is one of our most popular and is a particular favorite among customers looking for Japanese gifts / presents:

Customer Review, Dec, 2014 "A lovely little gift item for secret santa, given to someone who loves anything and everything Japanese."

In : Travel and World Cultures