Why Is The Mona Lisa ( La Gioconda Joconde ) So Special — What’s All The Fuss About?

Posted by smART bookx Stationery on Thursday, April 9, 2015 Under: Fine Art and Floral

The Mona Lisa
Painted by Leonardo da Vinci between 1503 and 1517, The Mona Lisa has many qualities that make it one of ‘The Greats’:
We could mention da Vinci’s ground-breaking sfumato technique (literally translating to ‘smoky’—it’s a deliberate hazy effect); Leonardo particularly used his sfumato around the corners of The Mona Lisa’s eyes and lips which are two key areas an artist often manipulates to convey mood. The use of sfumato means you cannot infer her mood hence the infamous enigmatic smile (see below).
We could discuss warm and cold color theory and da Vinci’s masterly use of it.  Notice below how much red Leonardo used in The Mona Lisa’s fingertips compared to her face.  Due to the long wavelength of red light it is not possible for objects in the distance to appear red (even if they are) thus artists often use red in a painting to bring objects forward.
The Mona Lisa is littered with warm and cold color contrasts.  It is no coincidence that the winding pathway to the left of the portrait works through the spectrum starting from the cooler blues and greens.
We could draw your attention to the intentionally erroneous horizon line behind The Mona Lisa’s left shoulder or even revisit the age old debate about whether she is pregnant.  It’s highly likely that this is exactly what da Vinci wanted us to do. Leaving things unsaid in a painting only draws a viewer’s attention to it all the more—we all love a mystery and Leonardo knew it.
But there are plenty of other paintings in this world which were ground-breaking firsts and they are not hung behind bullet, heat, vibration and humidity proof glass in a huge hall in the Louvre where as many as 65,000 people a day sometimes throng just to get a glimpse (at considerable risk of being pick pocketed).  There are a number of ‘Great’ paintings in this world but what makes the Mona Lisa ‘The Greatest’? The answer is, paradoxically, that it is none of the above and yet strangely it is all of them.
Leonardo da Vinci possessed one of the truly greatest minds that has ever lived.  When he died The Mona Lisa was still in his possession. Despite being a highly sought-after artist, ending his days working for the powerful King Francis I of France, he had kept her for over ten years.  It’s most likely then that he could not bring himself to part with her.  For a professional artist to resist parting with a painting there are usually only two reasons.  Firstly, a strong emotional attachment to the sitter, Lisa Gherardini, (which is possible but unlikely judging by his well-documented relationships with men) and secondly that they judge it to be their best work, the pinnacle of their achievement and, more pertinently in Leonardo’s case, the pinnacle of their knowledge.  But we are not talking about any average person’s knowledge here, we are talking about Leonardo da Vinci’s knowledge which was nothing short of the pinnacle of mankind’s knowledge at that time.  So you see, it is not the value of our judgement of the Mona Lisa that matters, it is the value of his judgment. The Mona Lisa is priceless not because of what it is but because of the possibility of what it represents—namely the judgment of a genius... and someone told you it was just the enigmatic smile! 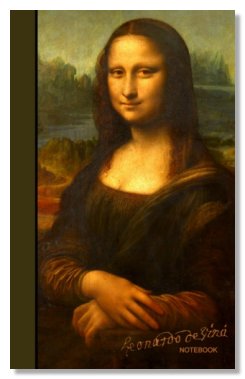 About The Last Supper
If The Mona Lisa, on the front of this notebook, represents the pinnacle of human achievement then The Last Supper, on the back, complements it well.  It represents everything that was human about Leonardo da Vinci.  Leonardo may have possessed a great mind but he was far from perfect.  He had an infuriating habit of turning up highly irregularly to fulfill contractual obligations, a fact that is well documented in the case of The Last Supper which drove the monks of The Convent of Santa Maria delle Grazie (in Milan) crazy. Indeed we are lucky that The Last Supper was finished at all (many of da Vinci’s commissions were not).  And, even though he did finish it, it is barely visible today thanks to Leonardo’s attempt to experiment with a new technique at someone else’s expense.  Da Vinci didn’t bother to test his new method of painting on dry plaster (the standard method of the day was to paint directly into freshly applied wet plaster so that the paint literally fused into the wall).  The result was disastrous; the fresco has not just peeled in recent times.  It began to fall to bits within only a few years of its completion.  This spur of the moment mentality of Leonardo’s in which he would drop a subject and move on to the next (akin to the child-like behavior of dropping the old toy upon catching sight of a new one) is the primary reason why all da Vinci’s great discoveries and inventions in actual fact made very little difference to the intellectual progression of humanity.  Other than his Treatise on Art, Leonardo failed to organize and order any of his notes.  All his great discoveries and inventions had to be rediscovered by others well before any of his notes were found and preserved in the modern era.

In : Fine Art and Floral